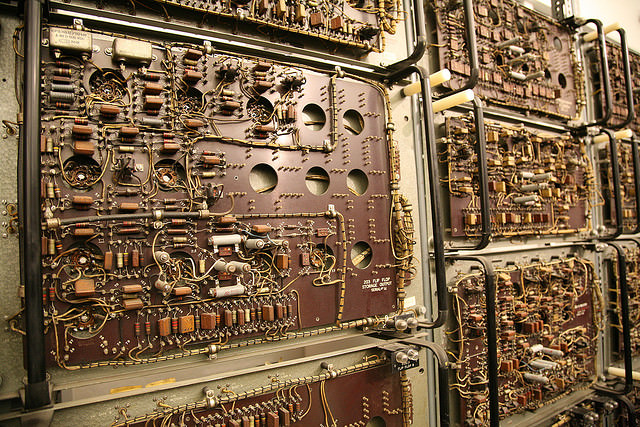 Those of you who have ever ready anything by Kurt Vonnegut know that his style is full of the type of sarcasm that reads as apparent fact. The following excerpt from his book Cat’s Cradle is no exception when it comes to what the author is actually saying about technology. This fiction traces the effects of pure knowledge manifested through technology, as well as the role of religion and belief in a world of tech. Cat’s Cradle is a quick read, and is well worth the time. The book maint ains of level of uncomfortable humor throughout, which made me ask myself more than once why I was laughing.

“[Research] isn’t looking for a better cigarette filter or a softer face tissue or a longer-lasting house paint, God help us. Everybody talks about research and practically nobody in this country’s doing it. We’re one of the few companies that actually hires men to do pure research. When most other companies brag about their research, they’re talking about industrial hack technicians who wear white coats, work out of cookbooks, and dream up an improved windshield wiper for next year’s Oldsmobile.”

“Here, and shockingly few other places in this country, men are paid to increase knowledge, to work toward no end but that.”

“Nothing generous about it. New knowledge is the most valuable commodity on earth. The more truth we have to work with, the richer we become.”

I’ve read two books recently that have traced the same type of theme, though from different angles. The first is the aforementioned Cat’s Cradle. The second is the late Neil Postman’s Technopoly. This is my first reading of anything by Postman, though he has been on my “to read” list for several years now. His legacy is one of cultural criticism, especially concerning the subjects of education, entertainment, and technology.

The book Technopoly expounds upon the current trend of wholesale faith in all things technical. In other words, in our common belief that anything created through an application of pure science will lead to a better life both in the here and now and in the future. This belief holds in medicine, education, entertainment, food consumption, as well as other areas.

As an example, Postman recounts an experiment he would perform on fellow colleagues. He would walk up to a fairly education person and say something like “Did you hear that there was an article in the New York Times today about a Harvard scientific study which found that individuals who drank coffee every morning are 35% smarter than those who don’t?” He found, more often than not, that though the subject of this study would have initial reservations about the study, the common response was something like “Wow, that’s strange”, or “Where did you say that study was from again?”. In other words, the common response was one of belief rather than unbelief.

The modern mindset states still that science is king. If it can be wrought by science, not only is it true, but it is most likely good as well. His term Technopoly applies to cultures who express an unreserved belief in the process of technological innovation. We eat it up without fail, oftentimes without a thought to the consequences. In this thread Postman traces some of what has been lost in education due to this reliance. One is the lack of focus in using memory. Since all information is immediately available it has become even more unnecessary to use memory as a discipline (in contrast to the era of print, in which reliance on memory was greatly reduced, but not totally eliminated). Also, since our culture has generally adopted the mindset that “what is newer is better”, education has shifted its focus away from the “classic founts” of education, such as logic, grammar, early philosophy, and the like.

I don’t totally agree with Postman’s conclusions. He seems to a certain extent to pine for a bygone age. But I do think his voice sounds a necessary warning. At the very least we should as a culture stand back and think of the consequences of our faith in science expressed through technology. Of course, I say this as a technological “early adopter”. I very often love looking into the latest and greatest in regard to technology, especially when it comes to personal computing and “gadgets”. I need to do a better job of critically engaging our culture on this front.

I do think that our culture has responded to some areas of technology in a critical way. Looking at the organic food movement of the past several years I would have to conclude that there has been at the very least a noticeable minority of people who have become interested in eating food the “natural” way. Sales of organic products in places like Whole Foods, local farms, co-ops, and markets has been stunning to me. People are interested in hormone-free milk, cage-free eggs, grass-fed beef, and pesticide-free produce. As far as the food market is concerned, the consumer doesn’t seem to be doing a terrible job letting business know what it wants. I can only hope that this particular trend will expand.

Consider this as an introduction to a topic that I’d like to continue writing about. Just because it’s new doesn’t mean it’s better. And just because we can do it doesn’t mean that we ought to do it, either because it is ethically questionable from a philosophical perspective, or because the consumer isn’t calling for it from an economic perspective.