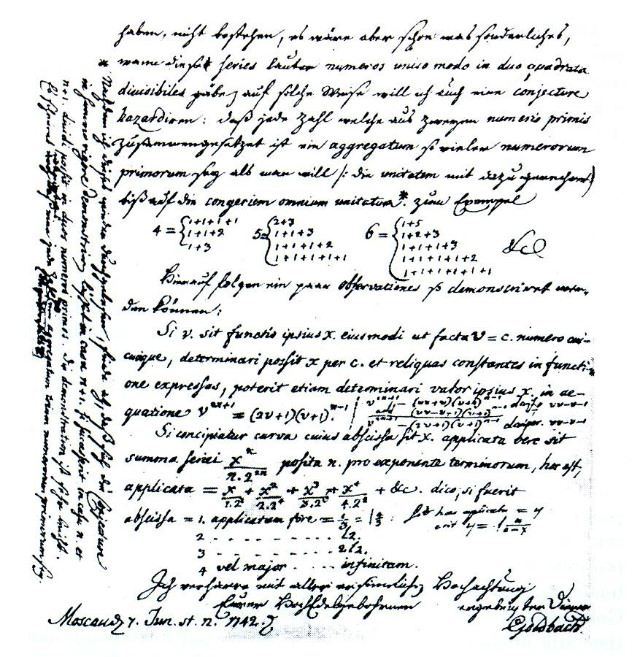 264 years ago today Christian Goldbach wrote a letter to fellow mathematician Leonhard Euler in which he conjectured a very simple idea.

This conjecture, though hauntingly simple, has resisted proof for over two and a half centuries. Though I have no evidence to support it, I would say that the so-called Goldbach conjecture has led to the insanity of more than one mathematician.

Simply stated in its modern form, here is the Goldbach Conjecture: Every even number greater than four can be expressed as the sum of two prime numbers. The number 2 is excluded since it is itself prime. Sounds simple, doesn’t it? Well, one can only wish that every easily stated problem had an easily stated answer.

In fact, sometimes the simplest sounding problems are the most resilient. This conjecture would be a prime example. Although millions of even numbers have been computer tested in confirmation to the conjecture, there is always that faint possibility that there’s an untested even number out there that doesn’t fit in (does anyone remember the Fermat Primes?). So while the Goldbach Conjecture seems experimentally obvious, its proof is still hidden.

I love mystery. I suppose that’s at least partially why I love math and logic. There are century old mysteries that exist in these disciplines. These mysteries provide a portion of the shared history of mathematicians and logicians. Also, I believe these mysteries provide hope. They give hope that even though math and logic have historically come a long way that there are still beautiful discoveries to be made. In other words, the mathematical landscape is lush.

It’s a shame to me that the popular perception of math views the discipline as total “objective” fact. When seen in this way the actual organic nature of the subject is skewed or forgotten. Math is not as “objective” as you’d think. At least not in the way you were taught as a child. To borrow a famous example, when first learning about the structure of an atom, a physicist may be asked to imagine a model similar to our solar system, with the planets revolving gracefully around the sun. It’s only later when the true nature of the atom is revealed as a much more complex reality governed by probability. A similar type of metaphor may be given for the mathematical sciences.

Aim to think deeper. Aim to revel in mystery. Thank you Christian Goldbach.