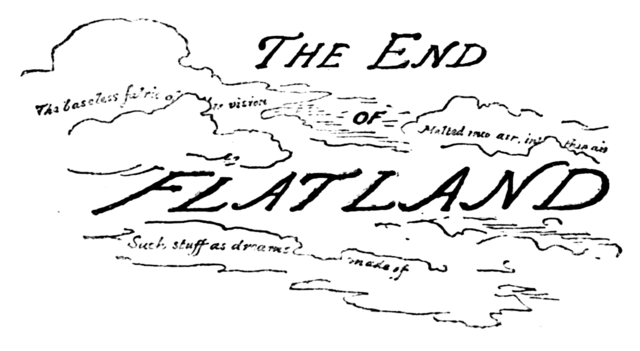 Yes, it seems that Edwin A. Abbott’s wonderfully original novel about the travels of the square named A. Square through one, two, and three dimensional space will soon be brought to video. The website for Flatland: The Movie can be found here. The trailer for the movie is available on the website or on YouTube here. Here’s the synopsis of the movie:

Flatland: The Movie is an animated film inspired by Edwin A. Abbott’s classic novel, Flatland. Set in a world of only two dimensions inhabited by sentient geometrical shapes, the story follows Arthur Square and his ever-curious granddaughter Hex. When a mysterious visitor arrives from Spaceland, Arthur and Hex must come to terms with the truth of the third dimension, risking dire consequences from the evil Circles that have ruled Flatland for a thousand years.

Well, it sounds like there has definitely been some license given to modify the orginal plot of the novel. But I have to say that the plot modifications were immediately forgiven once I found out that Martin Sheen was going to do the voice of A. Square. Who can argue with that? Also, Tony Hale, of the late TV show Arrested Development, will be playing the King of Pointland. At any rate, as the website explains, “The movie will be part of an educational DVD, which will include the original text from Abbott’s book.” Also, it looks like it will be coming out in spring 2007, which isn’t too far away! If you’re dying to get a copy you can sign up on the website for priority access to the DVD. While you’re anxiously awaiting its release, I suggest reading Abbott’s original work. It’s a really quick read and is imaginative and original.