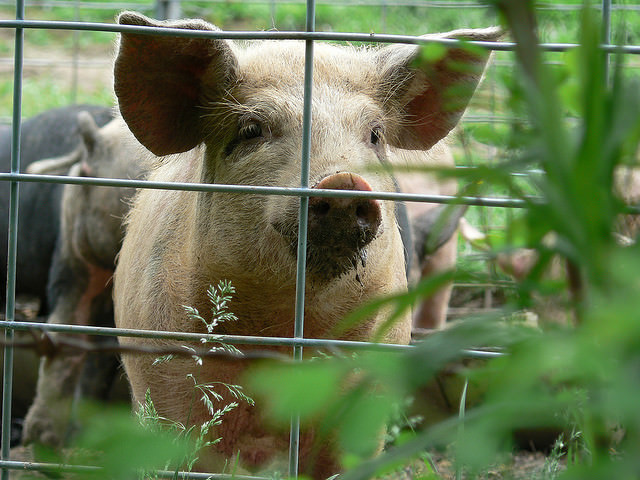 If you haven’t read this article written by Jeff Tietz for Rolling Stone magazine, I highly suggest reading it. The piece presents the pork industry through the business of Smithfield Foods, which is the largest pork producer in America. The article suggests that one of every four pigs in America is slaughtered by this company. There’s a lot of familiar ground covered for those who know about industrial food production, such as the living conditions of the pigs, unsanitary excrement levels, and animal antibiotic consumption. The article paints a bleak picture, but manages to do so while giving the reader a fair amount of readable statistics. There’s also a historical portion that tells of the story of Joseph Luter III, the chairman of Smithfield Foods. It’s interesting to read the economic implications of the growth of such a large company. The keyword of the entire article is pollution. This specific company (and others like it) exposes nearby people and land to a copious amount of pollution. One statistic relayed is that Smithfield’s largest processing plant “dumps more toxic waste into the nation’s water each year than all but three other industrial facilities in America.” Yikes.

Part of what I like about this writing is its focus on the impact on humanity. Oftentimes these types of stories are sad stories only from the perspective of the animal (which is still true), but doesn’t measure the ways that businesses like Smithfield Foods are adversely influencing human lives. Tietz focuses on the ways that pollution generated on the farms sickens people and keeps them from leading normal lives. Fish who used to live in the areas waterways are now dead, ending the employment of countless local fishermen. Workers in the hog plants die while becoming overwhelmed with the toxic fumes they breathe. People living in the area have contaminated drinking and bath water. The list goes on.

I’ve never been the type of vegetarian who gets angry with omnivores. But articles like this one give me reason to keep up my chosen eating habits. Our current methods of food production are not sustainable. When millions of gallons of pig shit per year are dumped into our rivers, that is NOT sustainable. When pigs are pumped full of drugs that breed antibiotic resistant germs that make people sick, that is NOT sustainable. And on and on. Okay, my rant is over. Read the article, it’s full of information that people should know.