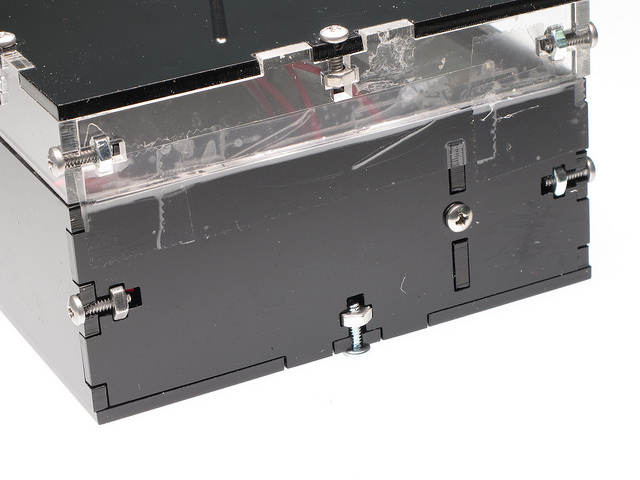 As I look through articles that I’ve bookmarked over the last many months, I realized that I had saved two that concerned machines that were built to interact with themselves in novel ways. I find this self-interaction quite entertaining for a reason I can’t quite pinpoint. Perhaps it’s because I generally think of a machine as a black box that takes an input and produces an output. I tend to segregate the input and the output entirely from the black box. But these machines are built only with the purpose of performing an action on themselves. They are input, output, and black box. And I find that extremely entertaining.

First, take this iteration of Claude Shannon’s “Ultimate Machine”, whose sole purpose when turned on is to immediately turn itself back off again:

As the video explains, you can find plans for building your own machine of the same type at Instructables. It should be said that I was introduced to this machine via Boing Boing much earlier when they directed me here. These folks call the machine the “Leave Me Alone Box”, and there are several videos on the site devoted to showing different fan-made machines in action. It looks like this site will also eventually sell a kit which allows you to build your own box. Kevin Kelly also has an article that gives some history about this “Ultimate Machine”.

Secondly, take Michael Kontopoulos’ machines that are built only with the task of nearly knocking themselves over:

Machines that Almost Fall Over from Michael Kontopoulos on Vimeo.

The artist explains his intentions on his website as trying “to capture and sustain the exact moment of impending catastrophe and endlessly repeat it.” I love it! So close to falling, and yet so far away! There are lots of other interesting projects to find on Michael’s website as well.