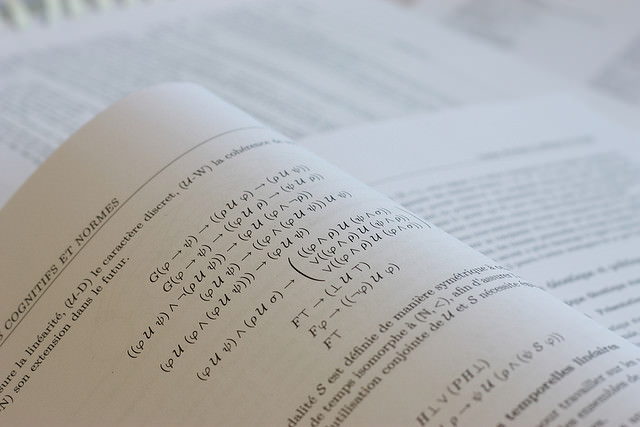 Ever since I heard about Logicomix, a graphic novel about the 20th century search for the foundations of mathematics, I was extremely excited to read it. And I’m happy to say that now I’ve finished it, it most certainly met, and exceeded, my rather high expectations.

First, I think it’s appropriate to explain what Logicomix is, and what it is not. First, it is a work of fiction. The authors are clear on this point, and explicitly spell it out in the epilogue. This graphic novel is meant to be a piece of art, not a pristine account of history. But its account of history will definitely give the reader an accurate outline of what happened in mathematics in the 20th century, even if the details aren’t entirely accurate, and even if certain liberties are taken in order to present a story which engages the reader in its narrative format.

Logicomix tells the story of 20th century mathematics by using Bertrand Russell as a narrator. The story is framed as a talk which Russell is giving to an audience directly before Britain’s entrance into World War II. He traces his life’s story from childhood through his work as an activist, and along the way we meet the familiar set of characters from that day, including Frege, Whitehead, Gödel, Wittgenstein, Cantor, etc.

The story is compelling. The authors, Apostolos Doxiadis and Christos Papadimitriou, do an amazing job of following Russell’s career, and of showing the personality and human struggle behind a quest centered around the abstract notion of truth. While most of the characters are obsessed with matters of the brain, the story also focuses on the heart as well. For instance, Logicomix does a good job explaining Russell’s obsession with madness, and his fear associated with it. There is also an aspect of meta-story in Logicomix, whereby the authors themselves appear throughout to drive home points and debate various tidbits of the story. This is an interesting aspect that mirrors to some extent Gödel’s meta-logical statements. I thought this was a good touch.

The art, done by Alecos Papadatos and Annie Di Donna, is stunning. As a material object, this graphic novel is beautiful. I’m a huge proponent of quality, and everything about the novel breathes quality. From the art to the color to the fonts to even the dimensions of the page and panels, Logicomix is extremely well engineered. Kudos to them both!

As a work of historical fiction, this story should appeal both to lovers of logic and mathematics as well as those who enjoy a fantastic story. The authors are using history to drive home what I believe to be an accurate and well-stated point, which I will not divulge here. If there are any flaws, I would point out two. First, Gödel is treated somewhat like a deus ex machina. Rather than providing more exposition into his life, the authors are content to have him come and go quite quickly, though I must admit that I LOVED the first panel in which he appears. It’s probably my favorite panel in the entire work. Secondly, there’s nothing about Turing, other than to mention him in the meta-story toward the end. One cannot truly understand logic without knowing something about computability. Granted, it seems that a sequel may be a possibility which begins with Turing and ends in the 21st century, but only time will tell. Until then, Logicomix comes as highly suggested.