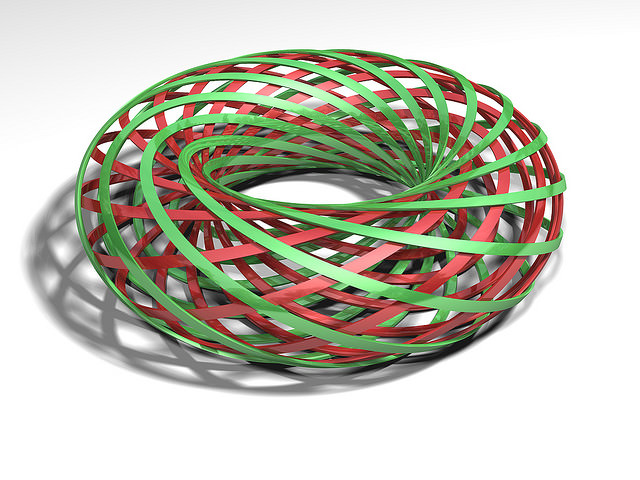 So thanks to Boing Boing I came across a beautiful page of art created by a person named Justin Mullins (Mathematical Photography). His art focuses exclusively on mathematical equations. I must say that I enjoy this site immensely, both for its vision and information. What adds to the beauty of this site is the brief poetic explanation the artist provides for most of his pieces. I especially suggest that you read the entries for the pieces entitled “Beauty” (Euler’s Relation) , “Ugliness” (the Four Color Theorem), “Mystery” (Godel’s Incompleteness Theorem), and “Power” (Aleph One).

I have such a hard time when someone (usually a speaker who knows nothing or relatively nothing about mathematics) uses an analogy that paints the field as the dull black and white objectified reality. First, this is not math. This is some strange twisted view of math that either you learned in second grade or that you have been fed by our culture. This view is pervasive and ugly. Math has so much more to do with elegance and beauty and the greater search of making sense of possibility.

I’d like to see two changes in the popular perception of mathematics. First, I’d like to see a greater effort by the mathematics community to make their material accessible to the popular masses. I believe this can be done by pursuing some of the artistic or philosophical implications and questions brought on by a particular technical result or problem. There are a few people who have done this, and off the top of my head I’d name Ian Stewart as an example. For instance, if one really looks at Euler’s Relation, and digests it like one would a Monet, I believe there’s just as much beauty to behold.

Second, I’d like to see postmodern theologians taking a more mature view of mathematics. Rather than painting it as the personification of the Modern era (and thus mostly an unhelpful and inorganic subject), I’d like each and every one of them to gain a familiarity of the subject and what it means for the twenty-first century. With this aim, I suggest that these readers refer to Godel’s Incompleteness Theorem, with some of the philosophical questions behind it.

Check out the site. And if you have a moment try to engage one of the pieces. Thank you Justin Mullins for taking such a simple idea and running with it.